I hadn't really planned out this day but it had seemed possible to make it to Sabadell, Spain. However, another late start and unexpected delays brought us into an interesting situation.


I filed the flight plan myself using Autorouter for the first time. It got us a pretty direct route, about 10% overhead. There were a ton of airways in this route: 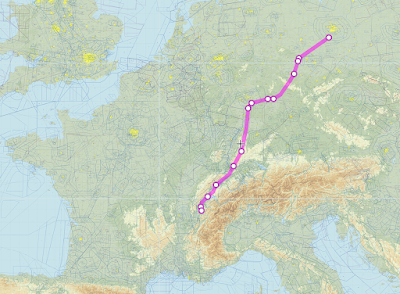 Joe grabbed some omelettes from the restaurant upstairs at EDAZ, which turned out to be top notch. The place is a little slow, but the food was excellent. Highly recommended.

In the meantime, we had the plane serviced with O2 and TKS at CD Aircraft Maintenance GMBH right next door to the FBO. They only accept cash payment for services but fortunately there was an ATM on site. All the airport, fuel, and FBO fees were paid with a credit card.

I also had to re-download the IFR charts onto my iPad since I had upgraded the OS to try to get flight plan filing working on it. That combined with running around to get service and file flight plan, etc. put us at a pretty late departure and I knew we had to hustle to land at Sabadell, Spain before sunset.

We picked up the IFR clearance via Bremen Radio after VFR departure. They gave me direct to a fix and then flight planned route.

The ease of entering airways into the GNS480 is clutch. Entering the above flight plan was easy and at one point later control assigned me direct to GUDOM, a point not in the flight plan but along one of the airways. I just hit Expand, scrolled to GUDOM, and then hit Direct. Easy.

Control handed me off a couple times and I eventually got assigned to 118.235MHz, one of the new 8.33khz channels that I couldn't tune in either of my built-in radios. I had to get out my handheld radio and plug it into the airplane's antenna, but it worked great. I wore a David Clark headset (plugged into my handheld via the adaptor) over my Clarity Aloft headset (with one of the earpieces removed) so I could operate both the handheld and aircraft radios and also hear the intercom. It was clunky but worked, and I was relieved to not have to tell Control that I couldn't accept the 8.33kHz frequency.


We quickly ran into severe headwinds, around 100kts, at FL210. I asked for a descent to FL180 and we picked up a couple of knots groundspeed but it wasn't much help.

We were above the clouds the whole way and didn't see much of the ground except this a snow capped mountain peeking through the clouds.

A little after an hour in I asked Erlangen Radar for a more direct route and they cleared us direct to a far waypoint, eliminating much of the big dogleg in the route. Our ETA was still looking pretty late, however.

The approach into Annecy was easy VFR with great views of the mountains and fields.


Our turn around at Annecy was super fast, service and fuel were quick, and I was hoping we could make it to Sabadell before sunset. I filed again via autorouter but could not get a very direct route.

Once airborne, the GPS was estimating 1840Z arrival, and the Sabadell airport closes at 1821Z. I asked Montpellier a couple times for more direct routing but he could not accommodate us immediately. Things were a little tense while we contemplated what would happen if we arrived late. About 40 minutes in we got a more direct routing and a slight climb. Once leveled off we had a little less headwind and with the more direct routing but we were still looking at an 1833Z ETA. I thought that sounded like it was pretty close after closing time and it was worth trying to make it.

Well about 20 minutes later, Marseille called us and told us the airport would be closed when we arrived and asked what we would like to do. To push the issue, I said I thought we would make it. They immediately switched me to Barcelona Approach and asked me to take it up with them. Barcelona was even less helpful, and seemed to pretend they didn't understand my request to arrive a few minutes late. We made a few tries and were generally ignored and repeatedly told to divert to Girona. Super unfriendly service.

We then realized we were running into a pretty serious thunderstorm. It had been tough to tell if the area of gray we were seeing below us was a break in the clouds or dense moisture but as we got close, an abrupt downdraft quickly had us turning around and running the other way with our figurative tail between our legs.

Sheepishly, I told Barcelona I'd be diverting to Girona and they immediately handed us to Girona Approach. We then wound our way down around some nasty cumulus buildups and made a visual approach to Girona as the storm was threatening nearby. Girona approach advised us of the severity of the storm and asked us to land quickly, in contrast to Barcelona Control who had failed to mention we were heading directly for a thunderstorm earlier. To be clear, I realize avoiding the storm was my responsibility but I found it interesting and in sharp contrast to the advisory service I'm used to in the US.

Here's the video of our diversion from LELL and arrival into LEGE:


We got on the ground without issue in Girona and the marshaller immediately advised us we'd have to use a handler. Girona is a large commercial airport and I wondered what the fees would be. Iberia handling turned out to be extremely friendly and told us it would be 20 euro for the night. Not bad. We were quickly on our way to get a rental car and head to Barcelona for the night after securing the plane on the ramp.
at October 08, 2017