My intention was to make it to Sondre Stromfjord, Greenland (BGSF) today to make more good time but the time zone change and super slow service meant we didn't make it to Greenland.


Shefferville airport is devoid of wifi, and neither of our cell phones had service, but the clerk at the airline counter said I could use his computer when the cabin crew using it was off on their next flight. So I killed time while waiting to file a flight plan and we ended up with a much later start than desired.

The flight from Schefferville to Kuujjuaq was smooth and mostly in clear weather. We needed TKS and pitot heat for about 10 minutes in some soup right after takeoff but the rest was clear. On the arrival in Kuujjuaq, the operator on Kuujjuaq radio (similar to a tower controller in the US) was quite a character with a funny demeanor and charming accent. At this point we were ridiculously far north in Canada, but still in Quebec! Canada is a big place.

Here's a video including cockpit audio of our approach and landing into Kuujjuaq:


We did not get fuel since it's available in drums only and I had planned to arrive in Iqaluit (our next stop) with enough reserve and enough room to buy a full barrel there. I filed a flight plan via fltplan.com and we put on our survival suits since the next flight leg would be mostly over (very cold) water. Man are those suits tight and uncomfortable. But we look like characters from Star Trek.

The weather from Kuujjuaq to Iqaluit was clear and smooth. We passed an interesting island with no signs of inhabitants but a high rock wall the entire way around that drops to what seems to be a road at sea/beach level. 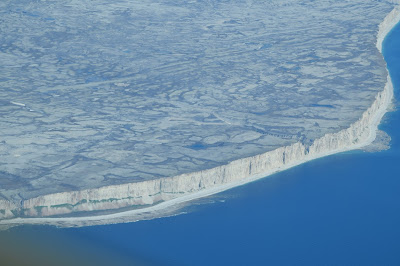 We also passed a number of small icebergs floating seemingly in a line from west to east. Our first iceberg sightings! 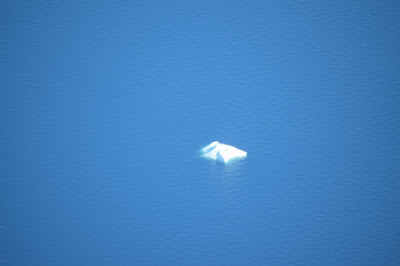 ATC was mostly in French on the radio at this point which was fun to listen to. There was not much other traffic up there but we were still talking to Montreal Center even that far up north.

The air got bumpy at this point off and on for the rest of the trip and we hit some clouds eventually. Our arrival into Iqaluit was in and out of IMC at 13000 ft. Picked up some light rime ice at -1C OAT but the TKS system handled it nicely.

We had intended to quickly get going from Iqaluit and make it to Greenland but the slightly late start, loss of an hour due to time zone change, the slowest wifi ever, and 20-30kt headwinds meant we wouldn't make it before the end of operational hours at 5pm local time. Opening fees for afterhours operations are $1062 so we decided to spend the night in Iqaluit. Lesson learned here is that going east with the time zone changes makes it really tough to make good time.

Getting avgas took forever, and in retrospect, we wouldn't have made it to Greenland anyway. We found the fuel drums but then had to literally wander around the airport ramp looking for help for a while. A friendly fellow in a nearby hanger chatted with us for a bit and then flagged down an airport service truck and eventually got us the right people.

The fuel was full service and they have their own electric drum pump, so I didn't need to bring the cheap siphon pump I had brought along in the end. Fuel was extremely cheap and the one barrel I bought filled the tanks just about exactly to the top as I had planned. We then taxied back to the FBO and started the process of looking for a hotel for the night.

Iqaluit is a very alien place. Not just because of the lack of vegetation and cold, but also the utilitarian design of everything is a bit odd. And to top it off the Inuit people there use a very alien looking writing system called Inuktitut syllabics.


Iqaluit apparently means "place of many fish" in Inuktitut and has always been an Inuit fishing location. It later took a role as a US Air Base and has been developed for strategic purposes. Now it is the capital and only city of the province of Nunavut.