What I had thought would be an easy day of flying to Edinburgh, Scotland, ended up being just one leg to Wick due to a late start.


We had stayed out late the night before checking out Reykjavik's nightlife so we didn't exactly get an early start this morning.

I called Drew at Far North Aviation at Wick to arrange arrival. Turns out that on Sundays the airport is only open 1415-1615Z and to arrive outside those hours we need prior arrangement, to submit an indemnity application, and to pay a fee. Given our late start and one hour time zone difference, it was impossible to make 5:15pm local time so I asked Drew to send over the forms.

Planning to make it to Edinburgh after Wick, I also emailed Signature at Edinburgh for arrival later and was told our request was denied by Airfield Ops due to lack of parking space. Was not expecting that! I started looking into alternates.

Checking out at the FBO in Reykjavik was very pleasant, though they really don't have much in the way of services to offer, especially on Sunday. There was no oil for sale and we were told oxygen service might be possible with significant delay and great expense. They did have precious TKS fluid and we purchased 2.5 liters to be safe, at €38 per liter!

The FBO helped us file a flight plan to Wick using Rocket Route. Got a pretty straightforward clearance: 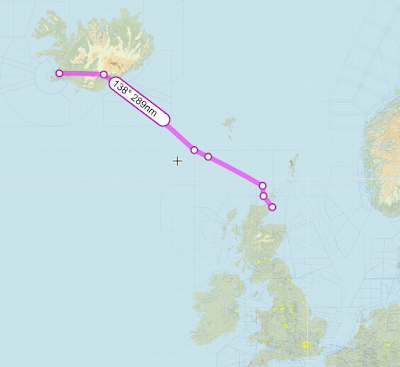 While getting our survival suits on, we met a pilot who had flown a light jet from KFRG (Farmingdale Long Island), the same place we started. It had only taken him a day, however. He was pretty impressed we had done the same trip in a single engine piston plane.

After chatting a bit, we headed to the plane. Fueling was very straightforward: Taxied to the pump and an agent fueled the plane and took our credit card right there. We were ready to head out over the water again.

It was very difficult to understand the ground/tower controller. Her accent was fairly thick and she spoke extremely quickly. I got pretty frustrated as we were running behind and had already been denied from Edinburgh, and she wasn't really able to speak more slowly despite my requests. After a lot of "please repeat" and some deep breaths we finally departed at 1420 local time.

ATC cleared us direct RATSU almost immediately without me asking, doing us a little favor in giving a more direct route. We hit some pretty significant headwinds right away and despite a solid 215kts TAS we were only making about 180kts ground speed at first.

The flight toward Scotland was super smooth, and we were well above the clouds the whole way at FL210. The cloud tops were slowly getting higher and were probably at FL190 toward the end, but we were never in them.

After giving estimated time to the last waypoint to Scottish Control, they offered to let Far North Aviation know what time to expect us. Very friendly service!

Upon arrival into Wick we had high ceilings and great weather, and were treated to stunning green scenery. We spotted tall cliffs, lots of sheep, tall stone towers, castles, and lots of open fields. 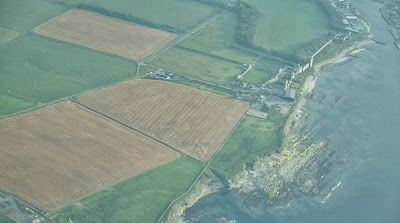 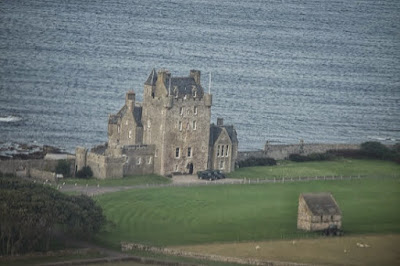 Drew at Far North greeted us on the ground and had the fuel truck ready almost right away, with the intention of getting us out to Edinburgh quickly. The guy is definitely the friendliest and funniest character we met on the trip, and was incredibly helpful, an absolute pleasure to deal with.
In contrast with Reykjavik, TKS fluid is super cheap and oil is readily available. Drew provided us with phone and wifi so we could arrange our next stop, but Signature Edinburgh repeated they did not have space for us so we decided to stay the night in Wick and enjoy Northern Scottish hospitality. Drew organized a hotel for us, recommended a restaurant for dinner, and dropped us off in the company truck.