Since we skipped Edinburgh, we were on schedule to get to Berlin on time.

Time to head out for Berlin. Again Drew and the staff at Far North were incredibly helpful and friendly. Filing flight plans in Europe was new for me at this point so Drew worked hard to file for us but ran into challenges with active danger areas. He had to keep trying different departure times to get the route to validate and we ended up waiting an extra hour to depart so we could fly a more direct route.

While Drew was working on getting the flight plan to file, I called the airport to arrange arrival. I had intended to fly to Strausberg (EDAY), having heard that it offers great service and prices. However, they told me they didn't have border control available and needed a form filled out to apply for the police to come and perform border control services. They'd have to get back to me later if approved.

I called Schönhagen (EDAZ) in the meantime to see if they would be an option and they told me they could handle everything without any prearrangement. They reassured me to just show up and so we decided to go to there instead.

I asked Drew to change the destination to EDAZ and he got the following routing as long as we departed later: 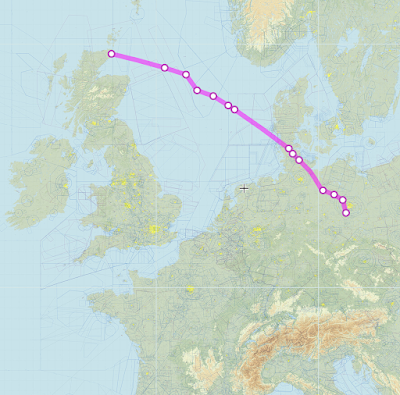 Departure was very easy with tower operational. They handed us over to Scottish Control and we were off over the ocean in no time. Scottish soon offered me "deconfliction service," but I didn't quite understand the offer and thought they were advising me they didn't offer traffic conflict service. Maybe you'd decline it if you had onboard TCAS. Will need to look that one up.

Control cleared us to only the first waypoint initially and FL090. Then got FL190, then FL210 about 12 minutes out. Punched through a cloud layer but OAT was high so no icing initially. We had a slight headwind at first that changed to a tailwind around FL180. Had to throttle back a bit to keep cylinder 6 out of the yellow. We were loaded to max gross weight after topping off TKS and fuel and taking a few quarts of oil with us, and performance was a bit more limited than usual.

On the climb up to FL210 we hit some pretty messy weather, with some bumps and lots of very wet clouds and rain. I didn't turn the TKS on right away and by the time I did about a minute later, there was a nasty looking buildup of ice on the leading edges of the wings. It took a few minutes for the system to prime as well and even more built up during that time, probably about a half inch in total. Lesson learned: Should have had it primed.

At this point we were using a credit card every few minutes to scrape the frost off the inside of the window to see the wing icing and trying to get a sense of whether the TKS was keeping it at bay. This was more ice than I had ever seen on my wings so I was super uncomfortable. I asked for a climb to FL230 to try to get on top of the weather but it was just as soupy up higher. And I was grateful that we had been able to fill the TKS system at Wick.

When we leveled off I also noticed that TAS was about 203kts, a solid 10kts lower than it should be, possibly indicating reduced performance due to ice buildup. This made me even more uncomfortable. And to top it off, I wasn't seeing TKS fluid on the windscreen, which I usually see coming from the prop slinger, making me wonder if the prop slinger was working at all.

I also noticed the engine wasn't staying cool as easily either. Only with cowl flaps full open could I keep all the cylinders in the green, and we wondered if there was ice built up in the intake somewhere.

And as icing (pun intended) on the cake, the Pitot heat switch would not stay on all of a sudden, and I had to press it over and over to try to get it to catch and not spring back. An iced pitot tube in IMC (and hence airspeed indicator failure) is not the end of the world, but it was another thing to stress out over. The killer is that when I had my annual done the shop told me they replaced the Pitot heat switch. I have my doubts...

Joe helped with the workload of monitoring the icing and engine and we continually discussed whether to descend to try to get to higher temperatures or even turn around. We had a fair amount of confidence based on the weather synopsis ahead of time that we wouldn't have long in this situation, but it was pretty tense watching it all and making sure we weren't seeing the situation getting worse.

Finally about 52 minutes into the flight, we broke into clear weather and breathed a sigh of relief. Sunshine above and no clouds below. With the OAT outside quite cold, the ice didn't go anywhere right away, but it would be slowly melting off in the sunshine over the next couple hours.

About half an hour later I noticed a dull ache in my right arm near my shoulder that I couldn't quite explain. Joe and I thought it might be a result of the pressure differential and 4 days of flying at high altitudes and then I recalled hearing that arm pain is a sign of a heart attack. Could a heart attack have been precipitated by the stress of the first hour? I had had the O2 flow rate cranked up to keep me clear headed during the tense part of the flight and now I cranked it up to the maximum to make sure my circulatory system was in good shape. This kept me at 95 O2sat consistently which is pretty good, and I now briefed Joe on how to land the plane if I became incapacitated. Drama.

There were some cool offshore windfarms off the coast of Denmark, and then we were happy to be over green fields again instead of water far below.

A small distraction was a couple requests from Copenhagen Control to turn right 10 degrees and another 10 degrees to stay clear of a military operation. About 20 minutes later they called up to let us know we were just underneath a military operation area "just in case you're wondering about the F16s at 12 o'clock and 5 miles." That sounded exciting and we kept looking out to see if we could see anything. About a minute later we saw the two of them cross right to left in the distance at high speed. Too bad they weren't closer.

In the last hour we got bounced to Bremen Radio on 125.855MHz, the first time I had heard a new 8.33kHz channel called out. That's the same as 125.85MHz, though, so tuning that frequency is no problem.

Then we got progressively more detailed clearances from ATC. Even with something like 60 miles to go we got PITEN BIRMO RATMO NISGA. We'd definitely be flying a pretty specific flight path in the event of comms failure. Broke out of the clouds and made an easy VFR approach into Schönhagen.