My intention was to make it to Reykjavik, Iceland (BIRK) today early in the day but since we were behind by one leg we ended up making it late in the day. Fortunately, the airport there is open 24/7 with no out-of-hours fees.


We got up early for a long day of flying to make it to Reykjavik as early as possible. Literally nothing was open so we figured we'd eat the oatmeal Joe had packed once we were airborne. I filed a flight plan via fltplan.com and we departed Iqaluit at 7:15am.

Crossing the ocean we had a 100kts crosswind from the north. It had been solid from the west the day before and it would have helped our ground speed considerably. But we still made well over 220kts TAS and about the same groundspeed.

The weather was clear and smooth at FL230 the whole way. I wanted to fly as high as possible over the ocean to maximize performance and safety in the event of an issue. We used oxygen at a pretty high flow rate to keep us alert and O2sat up.

The engine performed well. It was still during the break in period so I set power at about 90% according to my engine monitor. 27.8" MAP, 2500 RPM, 13.1GPH fuel flow. Cylinders all in the green with #6 running hottest as it has so far this trip. Oil pressure solidly in the upper green range as it has been so far as well. Happy engine means happy pilot.

155 miles out we were handed over to Iceland radio. I could barely hear them but a friendly airliner relayed messages for a while. They asked for our ETA into BGSF since we were outside radar coverage and gave an oceanic clearance direct to SF NDB at FL230 then direct BGSF. Not too complicated.

I was given the LOC 9 approach with vectors to intercept but misunderstood the FAF location on the plate. I think I thought the FAF was at the NDB but it's actually at DME 10 a few miles before that. To be safe and stay high longer, I waited to cross the NDB and then descended rapidly. Had to slip the plane to get down in time to make a coordinated landing.

The view on approach after breaking out of the clouds was pretty cool. Mountains and barren terrain all around. The exterior GoPro died on the way for some reason so I have no video unfortunately.

We arrived 11:37 local time, having lost 2 hours due to time zone shift. 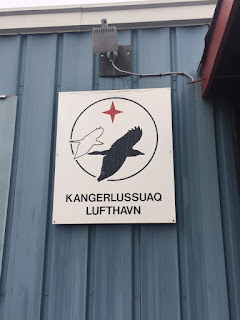 Turnaround at BGSF was incredibly slow. Greenland's only airliner, an A330, arrived just after us and took priority of the airport's limited resources and staff. On top of that, the clerk at the desk was not very friendly or helpful, and seemed to be chastising me for not being more informed. She was also constantly distracted by other things going on. It may have been more of a language gap and cultural difference... who knows? Great lesson in patience and rolling with the punches.

There was no wifi, no TKS fluid, no oil to purchase, and getting fuel took forever. On top of that, you'd think the fuel was liquid gold, since it cost $12.10 USD per gallon. And as if that wasn't bad enough, handling was $160 USD. Fortunately, they take Visa.

I had to file an ICAO flight plan on paper, something I've only ever done flying in Central America. As the clerk was unhelpful I used their computer to look up the codes to use and literally had to throw away the form and start over 4 times. It's not a user friendly process. I had plenty of time, however, as we were waiting for the fuel guy to do whatever it was he was busy with.

I also used the downtime to take photos of the approach plates for Reykjavik off the screen of the office computer. Super high tech. With no wifi at any of the recent stops, I had been unable to download them onto my iPad, and they had mysteriously disappeared from Iceland's AIP app. I suspect that they had expired and the app just blanks them out instead of marking them as expired. Good thing I noticed.

At this point we dubbed Kangerlusssuaq more like Kanger You Suck after that terrible service.


We finally departed BGSF at 1317 after all that.

The scenery was incredible, with mountains and icebergs everywhere. 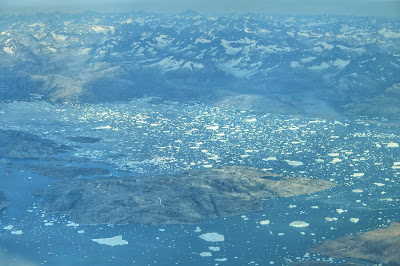 We picked up some ice climbing out and asked ATC for FL190 to stay comfortably above clouds and out of icing (I had filed FL170). When that wasn't high enough I asked again to climb to FL210 but was given FL240. At 240 we were mostly clear of clouds and got no additional icing.

It was cold out there, -25C to be exact, and we were scraping ice from the condensation of our breath off the windows with a credit card to see outside and monitor the icing situation on the wings.

We were down to 1.5 gallons of TKS fluid at this point. A little stressful that FBOs don't seem to have it up here despite what you would think. Lesson learned: take extra with you.

The approach into BGKK was a bit confusing, to be honest, and I banked on the fact that the other traffic on frequency was probably the only other traffic for the next hour or two. We weren't really issued any specific clearance since we were outside controlled airspace. As I approached we got bounced from Reykjavik Center to Sondrestrom Information to Kulusuk AFIS a few times before I got everything sorted.

On approach into Kulusuk we began to see the most stunning and wild scenery yet, with glaciers, mountains, ocean, and icebergs all around.

We could see dust rising from a departing plane on the gravel runway from quite a distance away, the only clear way to visually identify the runway. The AFIS operator was very friendly and just after landing asked if we would be departing right away after fuel and if so what our next destination would be. I told him Reykjavik and he offered to file a flight plan for me. Incredible service compared to Sondre Stromford!

After stepping out of the plane we spent a few minutes gawking at the epic scenery all around us while they brought the fuel cart over and began fueling us immediately. I think they might not have been so prompt had there been a commercial flight to attend to but we got lucky with great service. 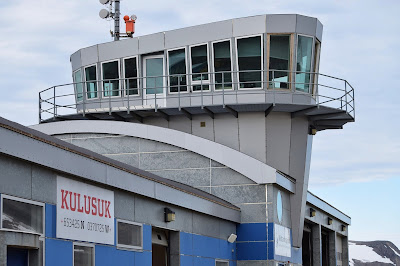 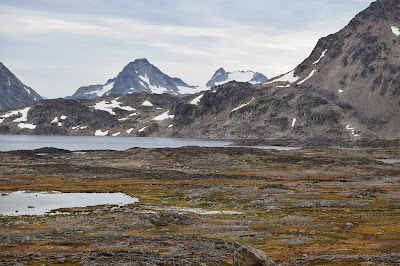 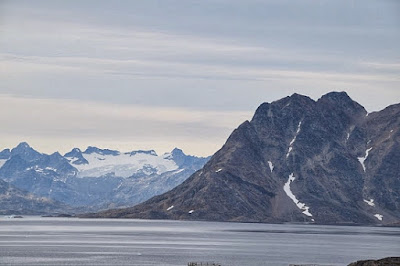 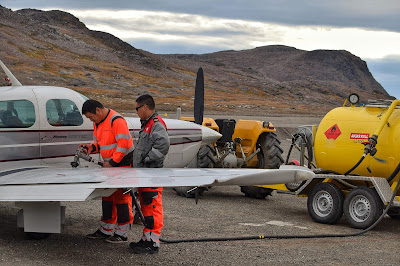 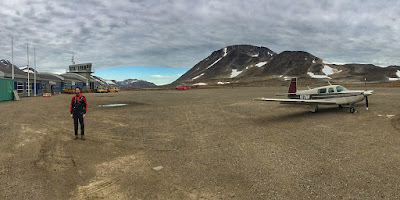 After a quick bathroom break I ascertained that indeed there is no wifi available on the east coast of Greenland either and went up to the tower to collect my invoice and flight plan. The tower guy was very friendly and chatty in sharp contrast to the cranky lady at the last stop.

Costs were similarly ridiculous as at BGSF, with the same $162 handling/departure and fuel at $13.39 USD/gallon. I paid at the office and we were on our way again.


The departure clearance was VAXAN 6530N SOPEN RK BIRK at FL230. About as direct as one can get and easy to fly. 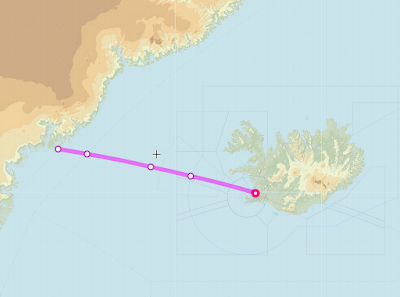 On climbout we were treated to more incredible scenery and had a little more attention span to appreciate it. We thought Iqaluit was an alien place but Kulusuk takes the award, scenery-wise. 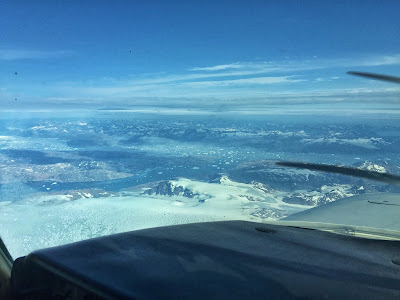 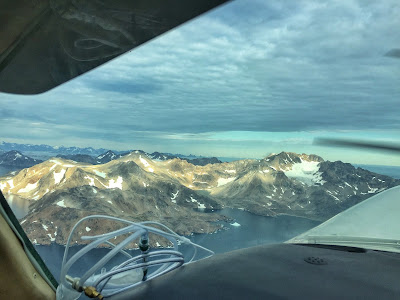 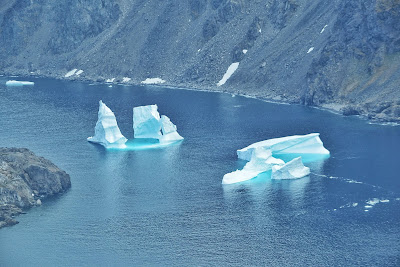 We climbed through a couple of thin cloud layers and then high above everything. Severe clear and smooth all the way to Iceland at FL230 with a broken layer far below us. It was fortunate that there was no icing at all given that we were low on TKS fluid.

A slight crosswind turned to a slight headwind part way through the trip but we were still above 200kts ground speed the whole way and made good time. We were making position reports as requested by ATC until they announced radar contact about 242nm out from Reykjavik.

We did pick up some light rime ice on approach into Reykjavik but we would be on the ground long before it could be a problem.

ATC service inbound to Reykjavik was quite helpful and proactive with descents and clearances like US ATC normally is, which was a relief after the awkward procedures at the 2 stops in Greenland. We were given the LOC 13 approach and I could barely read my grainy photo of the plate on the computer screen, but we got below the clouds quickly after stepping down.

We were on the ground at 2020 local time and customs was right there and ready to check us in after we were marshaled to the ramp. They were very friendly and the process was quick and easy. The lovely lady at the FBO was also very friendly and helped us find a hotel and warned us repeatedly with a laugh that Iceland is very expensive.

Customs was 75€ since we arrived after 6pm. Apparently it is 9€ before. Handling was 158€ and overnight parking was 10€.